Catfish and the Bottlemen

Catfish and the Bottlemen have announced their biggest Welsh show to date at Swansea’s Singleton Park on Saturday 23rd May 2020.

Bringing pop-punk icons You Me At Six, indie legends Feeder and dark-pop outfit Yonaka with them, it will be Catfish and the Bottlemen’s only show in Wales next year.

Having sold out venues around the world consistently for the past half-a-decade, including Cardiff Castle and Motorpoint Arena in spectacular fashion over the past 18 months, Catfish and the Bottlemen’s success is far from an overnight phenomenon.

Since the release of their 2014 platinum certified debut, The Balcony, the Llandudno formed quartet have played the likes of Pacifier, Cocoon and Business to crowds of all sizes – starting with social clubs in the UK between 2007 and 2014 before selling out Manchester’s Castlefield Bowl in 2016 and headlining the inaugural Communion Festival at Finsbury Park, London in July 2017.

Following The Balcony with sophomore LP, The Ride, Catfish and the Bottlemen were catapulted into arena-sell-out regulars. 7, Outside and Soundcheck were showcasing the four-piece’s ability to create floor filling anthems and there were no signs that the band were burnt out or lacking originality.

Still selling out venues across the world and drawing in fans everywhere from Brazil to Australia, Catfish and the Bottlemen would power through another world tour before the release of this year’s The Balance – their third record in five years.

Across three records, several EPs and a decade of extensive touring, Catfish and the Bottlemen have cemented their place at one of the UK's most important artists.

Tickets go on sale on Friday 6th December at 10am. Buy your tickets here. 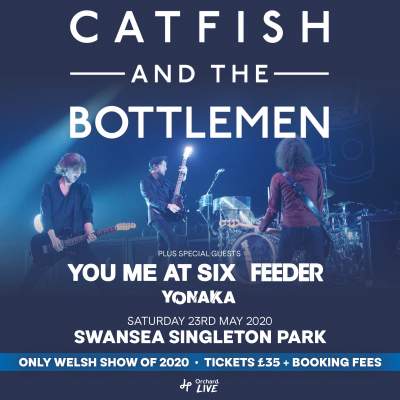