Dot To Dot has played host to a plethora of brilliant artists in years gone by. From acts just starting out and being offered a stage to showcase their new and exciting sound, to artists performing tracks from their third or fourth record at intimate venues - Dot To Dot combines both perfectly.

We've narrowed down some of our favourite artists to ever grace stages in Manchester, Bristol and Nottingham.

Perhaps the biggest ‘success stories’ to come from Dot to Dot is Ed Sheeran. After busking his way around the country before his talent was finally picked up, Sheeran has gone on to become one of, if not THE, the biggest artist in the world. Before debut LP, +, was even released, Ed Sheeran was drawing in huge crowds and teasing tracks such as The A Team, The City and Grade 8.

Sold out arenas, sold out stadiums, headlining Glastonbury – the list goes on. You name it and Ed Sheeran has done it.

Following three years of touring ÷, Ed Sheeran is taking 18 months away from the road.

Nottingham’s favourite musical export of the past decade played to packed out audiences at 2012’s Dot To Dot Festival – just months before his debut record catapulted him to worldwide dominance. No longer a stranger to the Rock City main stage, Bugg would give a commanding performance there and at Bristol’s The Fleece respectively before returning to both cities plenty of times over the past decade. Three records later and he continues to be a household name and one of the most exciting live performers in the UK and beyond.

Since their performance at Dot to Dot 2013, Catfish and the Bottlemen have become one of the world’s favourite indie rock bands. Their likeability has been formed by debut record, The Balcony, sophomore LP, The Ride and 2019’s The Balance – but before these records you could find them putting CDs on people’s car windshields outside of Kasabian shows. Now, however, you’re most likely to find them headlining festivals and selling out arenas.

Never shying away from going above and beyond to take a legion of new fans away from gigs, Catfish and the Bottlemen’s work ethic continued beyond Dot To Dot and saw them headline a range of shows and festivals worldwide, perform one some of the biggest stages and inspire the next generation of indie bands across the UK.

Before The 1975 were a sell-out-guaranteed arena band, they would hone their craft at Dot To Dot back in 2013. A setlist consisting of tracks now considered ‘classics’ (Girls, Chocolate, Robbers to name just three) presented fans with one of the brightest bands the UK will ever produce.

Since then, they would change the way people perceived indie music via a series of EPs (Facedown, Sex, Music For Cars and IV) and a number 1 album. Ripping up the rule book and straying from their typically ‘dark’ theme to release sophomore LP, I Like It When You Sleep … and follow up A Brief Inquiry into Online Relationships. With critics regarding them as arguably the best British band of the decade, The 1975 once again threw us a curveball with a punk-y anthem – People – which will feature of their fourth release, Notes On A Conditional Form.

Australian singer-songwriter Courtney Barnett was amongst the top of the bill at Dot To Dot back in 2014. Rattling through a ten-track setlist including favourites Avant Gardener, Pedestrian At Best and History, Barnett was on form to showcase exactly why she has gone on to become one of the most intriguing and exciting artists in the world right now.

Since the stellar performance, Barnett has released her debut LP, Sometimes I Sit and Think…, Lotta Sea Lice as a collaborative effort with Kurt Vile and sophomore album, Tell Me How You Really Feel. Countless worldwide tours have given Barnett a platform to share her witty songwriting prowess alongside a full backing band.

Pinegrove have one of the most unique sounds we’ve ever heard at Dot to Dot. Blending lashings of country, soul and math-rock, the likes of Cadmium, Size of the Moon and New Friends are fan favourites and sound as exciting now as they did when first released.

Back in 2017 they played early evening sets to seas of nodding heads across Bristol, Manchester and Nottingham. The same tour took them to Barcelona’s Primavera Sound festival and since then they have continued to perform across the world – most recently in the UK last spring; a run of shows that included a sold out date at Nottingham’s Rescue Rooms.

A relatively low-key affair saw Turnover play tracks from their then-new record, Good Nature as well as classics from Peripheral Vision. Although they were pigeonholed with emo and pop-punk hallmarks in the early days of their career, Turnover have since formed into one of the most well recognized ambient bands in the world.

Dizzy On The Comedown closed their short but sweet Dot to Dot set in Bristol, Manchester and Nottingham - and since May 2018, Turnover have released new LP, Magnolia and tour it extensively across the world.

They return to the UK with shows in Manchester, Birmingham and London next year.

Tickets for Dot To Dot 2020 are available here.

Listen to our playlist featuring some brilliant former performers at Dot To Dot Festival. 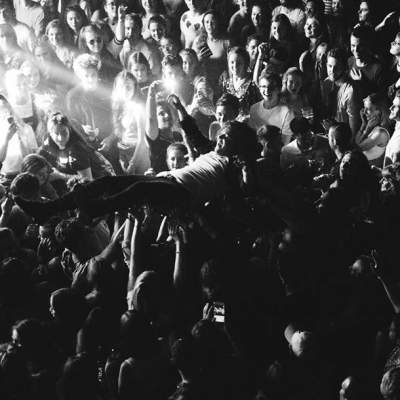