Ahead of their extensive UK tour next month, we caught up with Hot Snakes co-frontman John Reis to discuss pedicures, their back catalogue and plenty more.

1) You head out on a UK wide tour next month – how are you feeling about being back on the road?

“Feels really good. Super duper good. Just great, though my feelings might change as soon as I arrive at the first gig.”

2) You’re playing some pretty iconic, intimate venues on this run, for example The Bodega, Nottingham and Brudenell Social Club in Leeds – are you excited to be up close and personal with fans or is it still a bit nervy?

“Brudenell and Cluny are actually two of my favourite venues anywhere on earth. So I’m very much looking forward to being there. I prefer to be up close to the blokes, punters, mateys, etc. whenever possible (which is usually always the case).”

3) The run of UK dates is quite extensive – is there anything (other than play some great music) you’re hoping to do while you’re over here?

“I was hoping to get a pedicure in Eccles, but I don’t think that’s in the cards on this trip.”

4) Alongside the tour, you’ve just dropped new single ‘Checkmate’ – what can you tell us about that?

“We will be releasing a series of 7” records over the next year. The first is Checkmate. Musically the song relies on lessons learned from Coloured Balls. Metallic, Sharpie, punk siphoned by the ears of Hot Snakes.”

5) Your latest LP, Jericho Sirens, was praised by the likes of Pitchfork, NPR Music and The Guardian – how important is this reassurance, especially following a comeback?

“It’s important in that we really care what people think about our music, provided that they like it. If they don’t like it, then we tend not to care all that much. It’s nice to still have lots of friends that care for our noise.”

6) Your back catalogue has been reissued by Sub Pop Records – what does it mean to you to be part of such an iconic label?

“Sub Pop has been great, and we are excited for the next chapter with them on board.”

“Lots of men don’t wash their hands after using the bathroom. It’s important to shame them into doing so whenever you have the chance. We need to change the culture.” 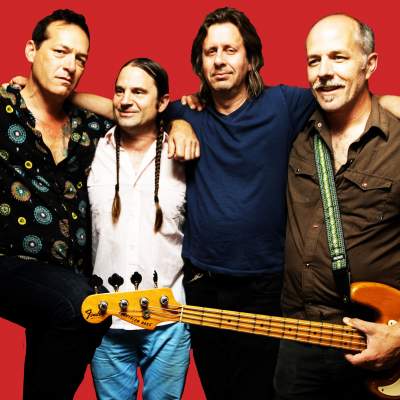