It's been a huge year so far for Francobollo. As well as releasing their debut album 'Long Live Life', they've been touring all over the world for festival slots as well as headline tour dates. They return to the UK next month where you can catch them at Bristol's Crofters Rights on 21st October and Nottingham's The Bodega on 1st November.

We had a chat with the band to ask them about their summer festival highlights, the recording of their new album and what to expect on their headline tour!

For those who haven't heard your music yet, how would you describe your sound?

Like everything you ever wanted for christmas as a child but were too afraid to ask.

You played a lot of festivals this summer, which was your favourite?

They've all been amazing but I reckon Meadows in the Mountains in Bulgaria or Green Man Festival. They were absolutely fantastic!

If you could choose to play a show in any country, which would you choose and why?

Probably Rio in Brazil or at Sealand. Sealand is a micronation that claims Roughs Tower, an offshore platform located in the North Sea approximately 12 kilometres off the coast of Suffolk, England… Yes I just copy pasted that from wikipedia. Wonder if we'd be the first band to ever play there? Maybe we could write its national anthem…?

You released your debut album 'Long Live Life' last month, which covers everything from claustropobia to long-distance love, and it took seven years for you to complete. Talk us through the process of writing and recording it and which song was the most personal?

We've recorded before but never really managed to capture the live-feel. We therefore decided to spend half a day recording then when the evening hit bring our mates in and have a silent disco live performance. We'd play the songs to them live in the studio rooms in the hopes of capturing the energy we feel from bouncing back and forth with a live audience. It worked great and captured that organic feel. Not a metronome in sight!

You're heading out on tour in the UK, kicking off next month. What can we expect?

And now for some quickfire questions.

Last gig you went to: Deerhoof, It was amaaazin'

Last album you listened to: Light Information by Chad VanGaalen

Pre-show anthem: No Pun Intended with The Hives

Why should someone buy tickets to your tour this month? Because if you do it next month you'll miss the gig and become the town's laughing stock

Don't be your town's laughing stock! Grab your tickets to see Francobollo live in Bristol and Nottingham now. 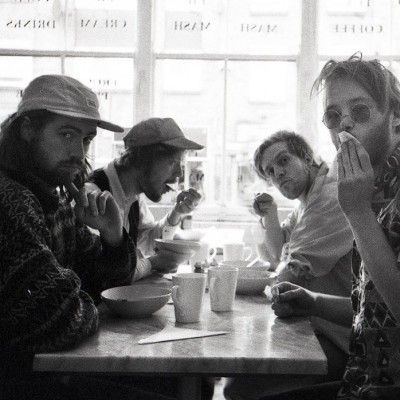