Newark Festival returns once again next year and brings with it a wealth of prestigious ‘80s royalty in the form of Marc Almond, Heather Small, Hue & Cry, China Crisis and Altered Image.

Branding the Saturday as ‘Discover the ‘80s,’ Newark Festival promises to let you relive pop classics from some of the decade’s biggest artists.

Last year saw dance and electronic artists Sigma and Becky Hill play on the Friday whilst indie favourites Razorlight, Lightning Seeds and The Feeling performed at Riverside Park on the Saturday.

2020’s edition returns to Riverside Park from 3pm onwards on 29th August and tickets are available from 9am on Friday 22nd November.

Marc Almond tops the bill on the Saturday with his impressive back catalogue. As one half of synth-pop icons Soft Cell, Almond’s work has been sold to over 30 million people worldwide and he continues to sell out venues across the world as a solo artist. Performing the likes of Say Hello, Wave Goodbye and Where Did Our Love Go to crowds in the UK, Europe and USA this year, Almond is renowned as being a pioneer of the synth-pop genre.

Sub-headlining the Saturday is former M People lead singer, Heather Small. Going on to enjoy a successful solo career – notably with debut record and lead single, Proud – Small has since been actively releasing new music as well as playing her eclectic back catalogue and iconic jazz numbers around the world.

Also featuring on the Saturday of Newark Festival will be Scottish pop duo, Hue and Cry. Since their 2005 comeback, they have featured on everything from Celebrity Big Brother: Bit on the Side to ITV’s Hit Me Baby One More Time – both times playing their biggest hit: Labour of Love.

Preceding Hue and Cry are Liverpool’s pop-rock favourites, China Crisis. Bursting onto the scene alongside fellow North West icons Frankie Goes to Hollywood and Echo and the Bunnymen, China Crisis enjoyed mainstream success with five studio albums across the decade – including their most well-received; Flaunt the Imperfection.

Opening the stage will be Scottish new wave outfit Altered Images. Their debut album, Happy Birthday, saw them crowned as the ‘Best New Group’ by NME before following it up with Pinky Blue and Bite.

Tickets for this year’s Newark Festival go on sale on Friday at 9am and are cheaper if bought in multiples.

Premier ticket holders (£90 each for 1, £85 each for 2, £80 for 4) are strictly limited and include a complimentary glass of Prosecco or juice, hot snack, luxury toilets, private bar and an enhanced view of the stage in an exclusive reserved area. Golden circle tickets are priced at £55 and the first release of general admission tickets are £32.50 each. Child tickets (must be under 16 to qualify) are £10 cheaper and apply to all categories. 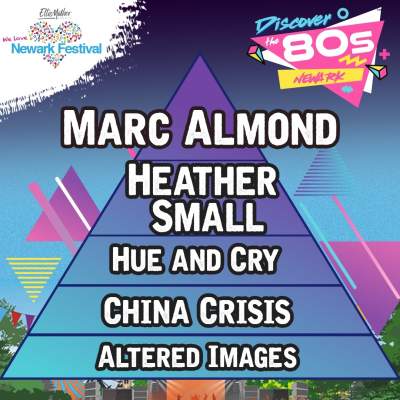