With January just around the corner, now's the perfect time to get planning your New Year's Eve! To help you out, we've put together a guide to the best events around the country where you can ring in 2019!

The Midlands' biggest NYE event returns for 2018! Rock City, Rescue Rooms and Stealth will be taken over by some of best acts in dance music to ring in the New Year in style. Confirmed for the night so far are (a-z) BRAME & HAMO, BRU-C, DARKZY, DETLEF, ELI BROWN, HAAI, HOLY GOOF, HAAI, PAWSA, SKEPSIS, TSUKI, UNKNOWN T and more to be announced!

Tickets for Stealth NYE are on sale here!

Known for their incredible Friday night parties, The Bodega will host a very special Pop Confessional this New Year's Eve, bringing the flower power to their wall-to-wall pop shindig! With two floors of decade-spanning music, the famous confessional booth, as well as drink deals all night, you'll want to get yourself down to The Bodega on 31st December!

Tickets for The Flower Power Pop Confessional are on sale here!

Oslo, Hackney will be opening their doors this New Year's Eve for the biggest celebration of the year. With a perfect selection of music including The Lounge, open for all your hip-hop, R&B, Pop, House and UKG needs, The Kitchen serving up the best disco, funk and boogie and Pop Confessional taking over The Garden, it'll be a night you won't want to miss!

The UK's biggest indie/alternative night will be taking you on a journey through time at The Garage this New Year's Eve, celebrating the best music to have graced your ears over the decades. Think Elvis, The Beatles, James Brown, David Bowie, MJ, Prince, Madonna, The Spice Girls, Oasis, Arctic Monkeys, Ed Sheeran and so much more!

Tickets for Propaganda Decades are on sale here!

This year, Borderline are taking you on a journey through the last three decades of indie rock'n'roll, from the late 80s to the present day with Tilted's Indie Time Machine New Year's Eve special. Spinning the anthems are resident DJs GRL TLK who will be treating you to The Smiths, Joy Division, Blur, Oasis, The Killers, Arctic Monkeys, The 1975, Catfish and the Bottlemen and loads more.

Tickets for The Indie Time Machine are on sale here!

Thekla will be travelling back in time this New Year's Eve, delving deep into the prehistoric jungle to celebrate the end of 2018 with earth's earliest prehistoric party poppers. As well as an ace music policy, Thekla will be decked out in full prehistoric decor, so dig out your caveman fancy dress and head to the boat on 31st December!

Tickets for The Pop Confessional Prehistoric Pop Party are on sale here! 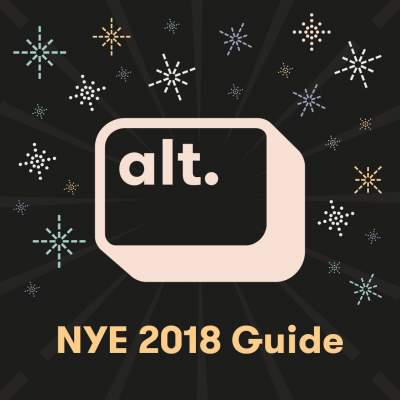