It's nearing the end of the week which means TWO very important things, it's almost the weekend and a whole host of new shows are about to go on sale, including MIRRORS with Pinegrove, Los Campesinos! and more, Kelela, Hannah Grace, Arch Enemy, Hell Is For Heroes and loads more. Have a listen below and find out how to get your hands on tickets.

Following two hugely successful years which have seen the likes of Bat For Lashes, Rhye, Allah-Las, Nadine Shah and more take to the stage, MIRRORS have announced their first lineup for 2017 and it's a good'un! Pinegrove, Los Campesinos!, Ultimate Painting, Josefin Öhrn & The Liberation and many more take over Hackney on 28th October!

Tickets are just £15 + booking fee and will go on sale on Friday at 10am. Buy your MIRRORS tickets here.

As well as dropping brilliant new track 'LMK' (check it out below if you haven't already), taken from her highly-anticipated debut album 'Take Me Apart', Kelela will be bringing her innovative R&B to London later this year. Don't miss Kelela live at Heaven on Wednesday 29th November. Tickets are on sale now! Buy your Kelela tickets here.

You'll definitely have heard her brilliant version of 'Praise You' and now South Wales musician Hannah Grace has announced a headline London show. Hannah will be live at the beautiful St Pancras Old Church on Monday 11th September. Tickets are on sale now! Buy your Hannah Grace tickets here.

Swedish melodic death metal band Arch Enemy have delighted fans by adding more dates to their 'Will To Power Tour', including Nottingham's Rock City on 10th Feb 2018 along with special guests Tribulation + Wintersun! Tickets go on sale on Friday at 10am. Buy your Arch Enemy tickets here.

Hell Is For Heroes

2018 marks 15 years since Hell Is For Heroes released their top 20 debut album 'Neon Handshake'. To celebrate, the band have announced they'll come to Nottingham's Rock City on 22nd February where they'll play the album in full with their original lineup. They'll also be supported by special guests A and Vex Red! Tickets go on sale on Friday at 10am. Buy your Hell Is For Heroes tickets here.

ALSO ON SALE THIS WEEK! My Vitriol + ...And You Will Know Us By The Trail of Dead, Freak + King Nun, Murray Lightburn and more! 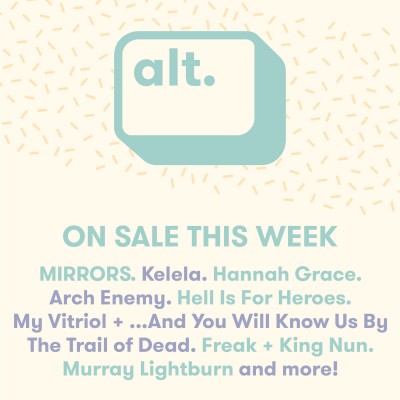