We've got some unmissable events on sale this week. Including Cigarettes After Sex, Cap'n Jazz, London Grammar, The Charlatans and more! Have a listen and find out how to get your hands on tickets!

With their eagerly awaited eponymous debut album just weeks away from release, Brooklyn ambient pop group Cigarettes After Sex have added shows at Nottingham's Rock City, Leeds Stylus and O2 Ritz, Manchester to their previously announced Rounhouse, London show! Tickets are on sale now! Buy your Cigarettes After Sex tickets here and check out the latest track from the new album 'Each Time You Fall In Love' below.

After meeting at the University of Nottingham in 2009, London Grammar return to their 'second home' on 26th October for a show at Rock City, to mark the release of their new album 'Truth Is A Beautiful Thing', check out the latest single 'Oh Woman Oh Man'. Tickets go on sale on Friday at 10am. Buy your London Grammar tickets here.

We're super excited to hear their new album 'Different Days', the follow up to 2015's 'Modern Nature' and now indie rock heroes The Charlatans have confirmed they'll head out on a UK tour in Autumn, including a show at Nottingham's Rock City on 29th November! Tickets go on sale on Friday at 10am. Buy your The Charlatans tickets here.

Songwriter and musician Stu Larsen has announced a European tour! Don't miss him at Bristol's The Louisiana, Nottingham's The Bodega and Manchester's Soup Kitchen in November! Tickets go on sale on Friday at 9am. Buy your Stu Larsen tickets here. 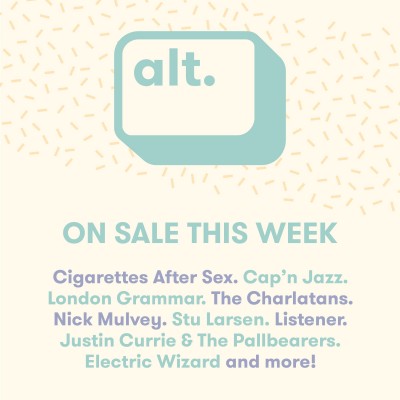