We've got another great lineup of shows going on sale this week. Including Rag'n'Bone Man, Tash Sultana, Alex Vargas, Danko Jones, Angaleena Presley and more! Have a listen to these great acts on sale this week and find out how to get your hands on tickets.

After winning the BRITS Critics' Choice Award and being shortlisted for BBC Music's coveted 'Sound of 2017' list, Rag'n'Bone Man has announced a date at Nottingham's Rock City on 26th April 2017. Tickets go on sale on Friday at 10am. Buy your Rag'n'Bone Man tickets here.

Due to the first show selling out, Melbourne musician Tash Sultana has added a 2nd date at Scala, London on 27th June due to huge demand! Tickets are on sale now! Buy your Tash Sultana tickets here.

singer, songwriter and producer Alex Vargas has confirmed UK dates in April as part of his 'Cohere Tour', including stops at Bristol's Thekla and Manchester's Deaf Institute. Tickets are on sale now! Buy your Alex Vargas tickets here.

As well as announcing new albub 'Wild Cat', Toronto rock band Danko Jones have announced a European tour, including a stop at London's The Garage on 15th March. Tickets are on sale on Friday at 9am. Buy your Danko Jones tickets here. 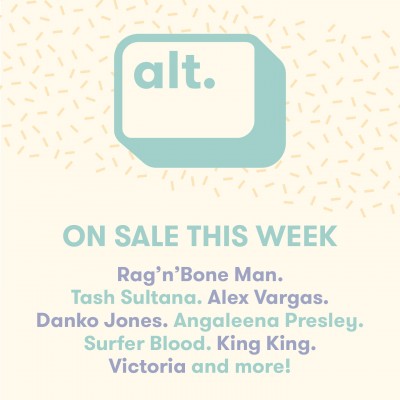