We've got some AMAZING events on sale this week. Including Sundara Karma, JP Cooper, Lowkey, Ride, Machine Gun Kelly and more! Have a listen and find out how to get your hands on tickets!

Fresh from their headline Dot to Dot Festival sets, Sundara Karma have announced tour dates for September and October of this year! Known for their superb live shows, you won't want to miss the band at O2 Academy Bristol, Nottingham's Rock City and Manchester Academy! Tickets go on sale on Friday at 9am. Buy your Sundara Karma tickets here.

It's been a great year for Manchester musician JP Cooper. Following the success of his brilliant track 'September Song' and the announcement of his debut album 'Raised Under Grey Skies', he'll be heading out on a UK tour this October, including shows in Newcastle, Nottingham, Cardiff and Bristol! Tickets go on sale on Friday at 9am. Buy your JP Cooper tickets here.

With his return from a multi-year hiatus and a sell out UK tour last year, rapper LOWKEY returns to the stage once again this September with headline shows at Manchester's O2 Ritz, Bristol's SWX and Rescue Rooms, Nottingham! Tickets go on sale on Friday at 10am. Buy your Lowkey tickets here.

It's been 20 years in the making, but now Oxford rockers RIDE return with their first new material in two decades. We can't wait to hear their new album 'Weather Diaries' and to celebrate, they've just announced a show at Bristol's SWX on 9th November. Tickets are on sale now! Buy your RIDE tickets here.

If you haven't checked out Machine Gun Kelly's third studio album 'Bloom' yet, you definitely should. To celebrate, the Ohio rapper heads out on tour in September, including a date at Rock City on 29th! Tickets go on sale tomorrow at 9am. Buy your Machine Gun Kelly tickets here.

Fresh from a SOLD OUT date at Rescue Rooms and the release of his debut album last month, the 21-year-old East London artist brings the 'Common Sense Tour' to Nottingham's Rock City on 14th November! Tickets are on sale now! Buy your J HUS tickets here. 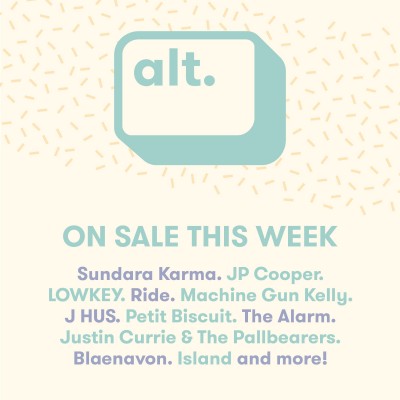