We've got another superb lineup of shows going on sale this week. Including Milky Chance, Frank Carter & The Rattlesnakes, The Flaming Lips and many more! Have a listen and find out how to get your hands on tickets!

Frank Carter has confirmed he'll head out on tour in December with his brilliant band The Rattlesnakes. Don't miss their Rock City, Nottingham date on 6th December. Tickets go on sale on Friday at 10am. Buy your Frank Carter & The Rattlesnakes tickets here.

Following the release of their critically acclaimed album 'Oczy Mlody' earlier this year, The Flaming Lips have just added a show in Nottingham to their August dates! Famous for their incredible live performances, you won't want to miss the Oklahoma rock band when they come to Rock City on 16th August! Tickets go on sale on Friday at 10am. Buy your The Flaming Lips tickets here.

Australian musician Paul Kelly comes to the UK for a headline tour this September, including shows in Bristol, Manchester and Nottingham, before finishing at O2 Shepherds Bush Empire, London. Tickets go on sale on Friday at 9am. Buy your Paul Kelly tickets here.

The Drums are back! Three years after the release of 'Encyclopedia', The Drums have confirmed plans for new album 'Abysmal Thoughts', released in June as well as a Thekla, Bristol show in October! Tickets go on sale on Friday at 9am. Buy your The Drums tickets here. 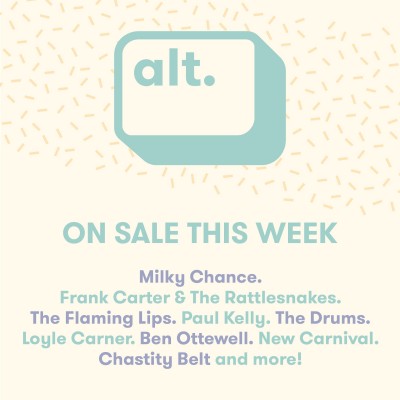