We've got a brilliant lineup of shows going on sale this week. Including James Blunt, Future Islands, Ashanti, Thrice and more! Have a listen to these great acts on sale this week and find out how to get your hands on tickets.

As well as announcing his new album, 'The Afterlove', James Blunt has confirmed he'll embark upon a UK tour in November with shows in Nottingham, Leeds, Glasgow, Birmingham, London, Brighton and Bournemouth! Tickets go on sale on Friday at 10am. Buy your James Blunt tickets here.

Future Islands return to the UK for performances in Liverpool, Nottingham and Bristol in April and May. Tickets are on sale now! Buy your Future Islands tickets here.

RnB superstar Ashanti comes to the UK in March for a very exciting date at Nottingham's Rock City on 8th March! Tickets are on sale now! Buy your Ashanti tickets here.

California rock band Thrice will be coming to the UK in Spring, where they'll play Rock City on 28th April! Tickets go on sale on Friday at 9am. Buy your Thrice tickets here.

To celebrate the 10th anniversary of their brilliant debut album 'Hats Off To The Buskers', Scottish indie band The View will play London's The Garage on 10th May! Tickets go on sale on Friday at 9am. Buy your The View tickets here.

With the release of their legendary album 'The Crimson Idol' now 25 years ago, W.A.S.P. will be hitting the road in October with the 'Reidolized' Tour, where they'll play the album in full, as well as their other hits! Tickets are on sale now. Buy your W.A.S.P. tickets here.

The Zombies will reunite for a date at the London Palladium on Friday 29th September where they'll play their classic album 'Odessey & Oracle' in full for the final time to mark the record's 50th anniversary! Tickets go on sale on Friday at 10am. Buy your The Zombies tickets here. 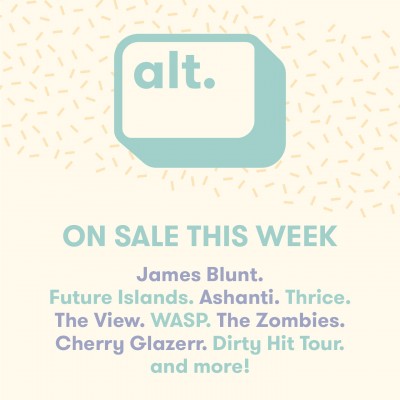