We've got another awesome lineup of shows going on sale this week. Including Slaves, Laura Mvula, Kate Tempest, Evil Scarecrow, Grandaddy and more! Have a listen to these great acts on sale this week and find out how you can get your hands on tickets!

The Tunbridge Wells duo are back! As well as announcing new single, 'Spit It Out' and new album 'Take Control', they'll be bringing their infamous live show to Nottingham's Rock City on 23rd November. Tickets go on sale on Friday at 9am! Buy your Slaves tickets here.

After the announcement that her stunning new album 'The Dreaming Room' has been nominated for the Merury Music Prize, Laura Mvula will be live at Rock City, Nottingham on 17th November! Tickets go on sale on Friday at 9am! Buy your Laura Mvula tickets here.

Kate Tempest will be celebrating upcoming new album 'Let Them Eat Chaos' with a December UK tour, including a stop at Manchester's O2 Ritz! Tickets go on sale on Friday at 9am! Buy your Kate Tempest tickets here.

Heavy Metal band Evil Scarecrow will bring their 'Rock You Like A Hurricanado' tour to Manchester, Nottingham & Bristol in early 2017! Tickets are on sale now! Buy your Evil Scarecrow tickets here.

Swedish rockers Truckfighters have confirmed UK dates in Nottingham, Bristol & Manchester! Don't miss the band when they hit the road in December. Tickets go sale on Friday at 10am. Buy your Truckfighters tickets here. 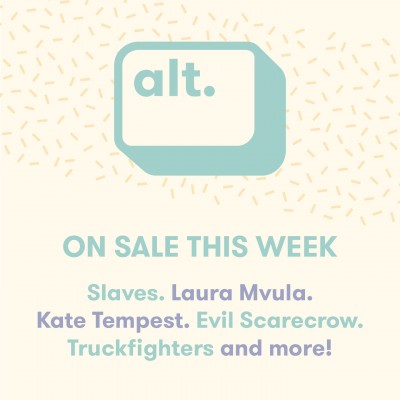