It's the end of the month!! Which means we've got so many great new shows lined up for you this week! Including Tash Sultana, The Rifles, Skindred and more! Take a listen below and find out how to get your hands on tickets for these unmissable gigs.

With her SOLD OUT O2 Shepherd's Bush Empire show taking place this week, Australian singer-songwriter Tash Sultana will return to London in September next year for her biggest UK gig to date at O2 Academy Brixton! Tickets go on sale on Friday at 10am and they're sure to go fast. Buy your Tash Sultana tickets here.

Indie rock favourites have announced FIVE shows at London's The Garage in February where the band will play each of their five brilliant albums; No Love Lost, Great Escape, Freedom Run, None The Wiser and Big Life, in full! Individual tickets as well as special season passes go on sale on Friday at 9am. Buy your The Rifles tickets here.

To celebrate the release of their eagerly-awaited new album 'Marble Skies', Django Django have confirmed live shows in Nottingham, Manchester and Bristol for March 2018! Tickets go on sale on Friday at 10am. Buy your Django Django tickets here.

Following the recent announcement of their brand new album 'Invisible Storm', Turin Brakes have excited fans by announcing a must-see UK tour! Catch the band live at Nottingham's Rescue Rooms and Manchester Cathedral next March. Tickets go on sale on Friday at 10am. Buy your Turin Brakes tickets here. 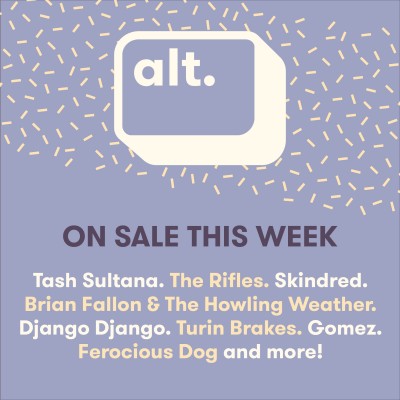