We've got some tip-top shows going on sale this week. Including Father John Misty, Dropkick Murphys, The Jesus and Mary Chain and many more! Have a listen and find out how to get your hands on tickets!

Following the release of his highly anticipated new album, 'Pure Comedy', Father John Misty confirms a show at O2 Apollo Manchester in November with support Weyes Blood. Check out the title track of the new album below! Tickets go on sale on Friday at 9am. Buy your Father John Misty tickets here.

They kicked off their year by releasing new music and now American celtic punk band Dropkick Muprhys will take their '11 Short Stories Of Pain & Glory' tour to Nottingham's Rock City, O2 Academy Liverpool and O2 Academy Bournemouth this June! Tickets go on sale on Friday at 10am. Buy your Dropkick Murphys tickets here.

The Jesus and Mary Chain

With latest album 'Damage and Joy' still fresh on the album stands, Scottish alt-rockers The Jesus and Mary Chains have confirmed their return to Nottingham for a show at Rock City this October! If you haven't heard any tracks from their new LP yet, listen below! Tickets are on sale now! Buy your The Jesus and Mary Chain tickets here.

'Cars' hero Gary Numan brings his tour to Rock City on 7th October and WE CAN'T WAIT! Have a listen to the aforementioned track below and make sure that you're at this unmissable show. Tickets go on sale on Friday at 10am. Buy your Gary Numan tickets here.

From 'She's So Lovely' to 'Elvis Ain't Dead' and 'I Wish I Was James Bond' to 'This Ain't A Love Song', Scouting for Girls have been responsible for some huge pop jams and now the band celebrate their 10 year career with an anniversary tour, including a show at Rock City, Nottingham on 1st December! Tickets go on sale on Friday at 9am. Buy your Scouting For Girls tickets here.

What a busy couple of months ahead for Georgia musician Ron Pope, who's just announced his 'Dancing Days World Tour'. He's coming to the UK for a show at London's The Garage on 5th November! Tickets go on sale on Friday at 10am. Buy your Ron Pope tickets here.

Being called 'The most compelling act you can see right now' by The Guardian, you now have another chance to see Ezra Furman after he announced a show at Nottingham's Rescue Rooms on 6th July! Tickets are on sale now. Buy your Ezra Furman tickets here.

North Carolina indie pop duo Sylvan Esso release their new record 'What Now' this week and to celebrate they'll also be heading out on tour in November, including a stop at Manchester's Gorilla on 11th. We're huge fans of 'Die Young' and we're sure you will be too, check it out. Tickets go on sale on Friday at 9am. Buy your Sylvan Esso tickets here.

ALSO ON SALE THIS WEEK! The Districts, Will Hoge, Jane Weaver, The Hempolics, Tei Shi, And So I Watch You From Afar and more! 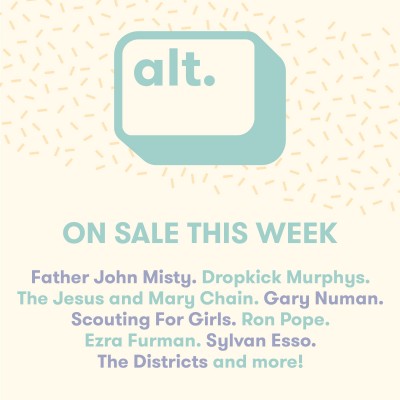