We've got some hot shows going on sale this week. Including The War On Drugs, Little Mix, The Sherlocks and many more! Have a listen and find out how to get your hands on tickets!

The War On Drugs

Along with the release of 'Thinking Of A Place' (listen below!), their first new music in three years, The War On Drugs have confirmed UK dates at O2 Apollo Manchester and London's Alexandra Palace! Tickets go on sale on Friday at 10am. Buy your The War On Drugs tickets here.

After releasing their platinum selling album 'Glory Days' last year, which included jams such as 'Touch', 'Shout Out To My Ex' and 'No More Sad Songs', Little Mix head out on a very special tour this Summer, including a stop at South of England Event Centre on 1st September! Tickets are on sale now. Buy your Little Mix tickets here.

Celebrating their debut album, The Sherlocks confirm dates at Rock City, Nottingham and SWX Bristol this September as part of their 'Live For The Moment' Tour! Make sure you check out the latest track from that new album 'Chasing Shadows'. Tickets go on sale on Friday at 10am. Buy your The Sherlocks tickets here.

Off the back of her acclaimed debut mini-album The Visitor, Los Angeles' Kadhja Bonet has announced her second tour of the UK later this year, with shows at Thekla, Bristol on 31st October and Islington Assembly Hall, London on 1st November! Tickets go on sale on Friday at 10am. Buy your Kadhja Bonet tickets here.

Those Norwegian punk rockers SlØtface return to the UK in October! Catch the band in Manchester, Nottingham and Bristol to celebrate the release of their debut album 'Try Not To Freak Out' in September. Tickets are on sale now! Buy your SlØtface tickets here. 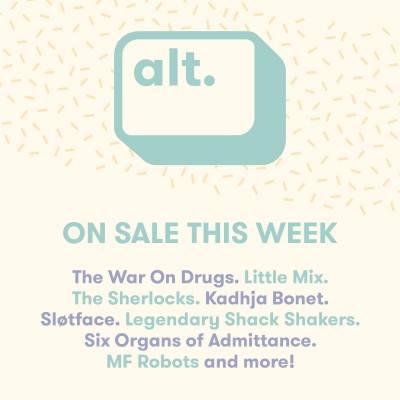 The War on Drugs Tickets