We have a whole whost of brilliant shows on sale this week! Including Mystery Jets, Ed Sheeran, Future Islands, Gogol Bordello and more! Have a listen and find out how to snap up those tickets below!

Indie heroes Mystery Jets have announced the #jetrospective, five shows at London's The Garage in September where they'll play each of their five brilliant albums (Making Dens, Twenty One, Serotonin, Radlands and Curve of the Earth) in full. Individual tickets will be on sale, as well as a special Season Pass, which gets you entry to all of the shows as well as exclusive access to an aftershow hang with a Mystery Jets DJ set, a commemorative laminate, queue jump, a signed #jetrospective lithograph as well as access to exclusive content! Tickets go on sale on Friday at 9am. Buy your Mystery Jets tickets here.

Did you miss Future Islands on their SOLD OUT tour earlier this year? Don't worry! The Baltimore trio will be back in the UK for live dates at O2 Apollo Manchester and O2 Academy Bournemouth in November! Tickets go on sale on Friday at 10am. Buy your Future Islands tickets here.

To celebrate the release of their upcoming album, 'Seekers and Finders', Gogol Bordello have announced they'll head out on a UK tour this winter, including a show at Nottingham's Rock City on Saturday 16th December! Tickets go on sale on Friday at 10am. Buy your Gogol Bordello tickets here.

Los Angeles indie folk band Lord Huron come to the UK for live shows in January 2018! Don't miss them at Manchester's Gorilla and Bristol's Thekla. Tickets go on sale on Friday at 10am. Buy your Lord Huron tickets here.

As well as announcing his debut solo album, In The Kingdom Of Dreams, The Felice Brothers' Ian Felice has also announced Uk tour dates in Manchester, London and Bristol! Tickets are on sale now! Buy your Ian Felice tickets here.

Fresh from celebrating their 40th anniversary tour last year, British punk band The Damned will head out on tour again in February next year! Don't miss them live at Rock City on 4th Feb! Tickets are on sale now! Buy your The Damned tickets here. 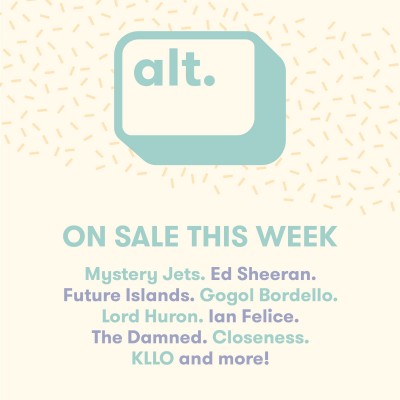