We've got another great lineup of shows going on sale this week. Including St. Paul and the Broken Bones, Circa Waves, Gabrielle Aplin, The Rifles and more! Have a listen to these great acts on sale this week and find out how to get your hands on tickets.

St. Paul and the Broken Bones

To celebrate their new album 'Different Creatures', Liverpool indie rockers Circa Waves have announced a date at Nottingham's Rock City on 28th May! Tickets go on sale on Friday at 9am. Buy your Circa Waves tickets here.

Fresh from releasing her beautiful new single 'Miss You', Gabrielle Aplin has announced some special February shows in Brighton, Bath and London! Tickets go on sale on Friday at 9am. Buy your Gabrielle Aplin tickets here.

The Rifles have had a big 2016, with the release of new album 'Big Life', a performance at this year's Splendour Festival and UK dates last month! 2017 is looking to be huge too with an 'Unplugged Tour' planned for May next year. Catch the band in Bristol, Manchester, Nottingham & London! Tickets are on sale now! Buy your The Rifles tickets here.

The Moonlandingz, a collaboration between members of Fat White Family and The Eccentronic Research Council, have confirmed a UK tour in March and April 2017, including stops in Nottingham, Sheffield and Thekla! Tickets go on sale on Friday at 10am. Buy your The Moonlandingz tickets here. 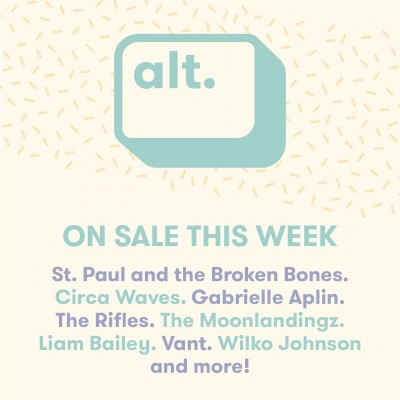