We've got some brilliant shows on sale this week. Including Aimee Mann, MØ, Black Rebel Motorcycle Club, Hit The  and many more! Have a listen and find out how to get your hands on tickets!

Following the release of her acclaimed album, rock singer-songwriter and musician Aimee Mann has announced a show at London Palladium as part of her 'Mental Illness' tour. Take a listen to 'Goose Snow Cone' from the new record. Tickets are on sale now! Buy your Aimee Mann tickets here.

If you haven't heard her brilliant new track 'Nights With You', fix that by listening below! But Danish rising popstar MØ has also announced the 'Straight On Till Morning' tour including a date at O2 Academy Bristol on 23rd October! Tickets are on sale now! Buy your MØ tickets here.

Hit The Deck All Dayer

Hit The Deck Festival and everyone's fave octopus returns for a special event at Bristol's Thekla on 5th August with an ace lineup, including Milk Teeth, Big Spring, Wallflower, HCBP and more to be confirmed. You'll want to snap your tickets up for this one! Tickets go on sale on Friday at 10am. Buy your Hit The Deck tickets here.

Get ready for the #DENCHest gig of the year! Following the release of his ace EP 'You'll Never Make A Million From Grime', Lethal Bizzle has announced his 'I Win' tour for October, including a show at Nottingham's Rock City on Monday 16th. Tickets go on sale on Friday at 10am. Buy your Lethal Bizzle tickets here.

What a big year it's been so far for Brighton indie pop band Fickle Friends! Not only are they getting loads of radio play with the jams such as Hello Hello (check it out below below), Brooklyn and Swim, they're also finishing up a massive tour with The Kooks and they've just announced their biggest headline tour to date, including shows at Thekla, Bristol and Nottingham's Rescue Rooms in October! Tickets go on sale on Friday at 9am. Buy your Fickle Friends tickets here!

Los Angeles folk punk band Girlpool are se to release their new album 'Powerplant' this week and to celebrate, they've only gone and announce a tour! Catch the duo live at Thekla, Bristol and Gorilla, Manchester in September! Tickets are on sale now! Buy your Girlpool tickets here.

Did you catch the massively talented Joan Shelley performing 'Where I'll Find You' on Later.. With Jools Holland this week? If you didn't, don't worry, just check out the video below and thank us later. She's also confirmed a London date at Bush Hall on 12th September! Tickets are on sale now! Buy your Joan Shelley tickets here. 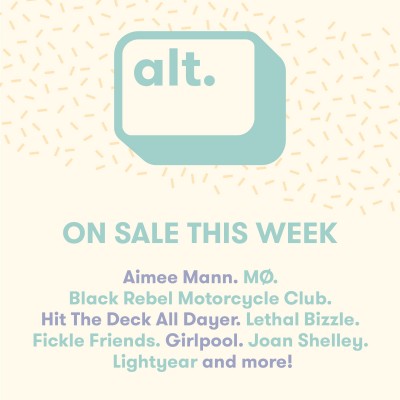