We've got some ace shows on sale this week at alt. tickets! Including Nick Mulvey, St. Vincent, Sundara Karma, Turnover, Mr. Big and more! Have a listen to all of these great acts and find out how to get tickets below!

Fresh from an incredible set at last weekend's Glastonbury Festival, Cambridge musician Nick Mulvey has announced a series of UK dates this October to mark the release of his upcoming album 'Wake Up Now'. Don't miss Nick at O2 Academy Bristol and O2 Ritz Manchester! Tickets go on sale on Friday at 9am. Buy your Nick Mulvey tickets here.

Musician and songwriter St. Vincent has announced a show at O2 Apollo Manchester on 18th October as part of her 'Fear The Future Tour'. Known for bring one of the most distinctive artistic voices and arrestingly original guiarists of our generation, you won't want to miss this show! Tickets go on sale on Friday at 10am. Buy your St. Vincent tickets here.

We absolutely loved them at this year's Dot to Dot Festival and it seems like you guys did too! After their first Manchester date SOLD OUT, Sundara Karma have added a 2nd show at Manchester Academy on 12th October due to huge demand! Tickets are on sale now! Buy your Sundara Karma tickets here.

All the way from America's Virginia Beach, rock band Turnover come to the UK for dates in Nottingham, Manchester and London this September to mark their new album 'Good Nature'. Tickets are on sale now! Buy your Turnover tickets here.

American rock heroes Mr. Big have just announced a headline show at Nottingham's Rock City on 16th November to celebrate the release of the band's ninth studio album, Defying Gravity. They're joined by The Answer and Faster Pussycat. Tickets go on sale on Friday at 10am. Buy your Mr. Big tickets here.

They're known for their unique live shows and now Moulettes have announced four final dates to round off their Preternatural Tour! The band take their astounding show to Glasgow, Manchester and Bristol in December, before heading to London's Cadogan Hall for a co-headline show with 9Bach! Tickets go on sale on Friday at 9am. Buy your Moulettes tickets here. 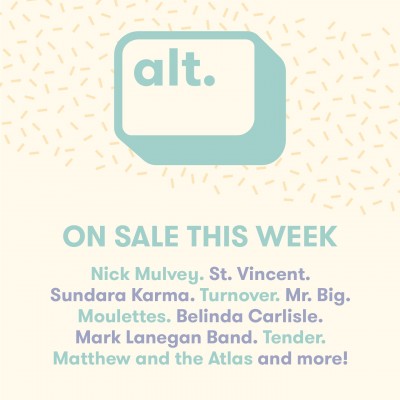