We've got another incredible lineup of shows going on sale this week. Including You Me At Six, American Football, The Growlers, The Album Leaf and more! Have a listen to these great acts on sale this week and find out how you can get your hands on tickets.

You Me At Six

This week, You Me At Six have not only released new music, in the form of the incredible 'Night People' but have also announced a headline date at Rock City, Nottingham in October to celebrate the release of their upcoming studio album! Tickets for this show are now SOLD OUT!

Also returning with new music this week is Illinois band American Football, who announced their first album in 17 years as well as a headline date at London's O2 Shepherd's Bush Empire in Feb 2017 to celebrate the release of the self-titled sophomore album. Take a listen to the first track from the new album 'I've Been So Lost For So Long' below. Tickets for their London date go on sale on Friday at 10am. Buy your American Football tickets here.

Psychedelic surf rockers The Growlers have confirmed their first London date in two years! You can catch the band at Electric Brixton on 15th November! Tickets go on sale on Friday at 9am. Buy your The Growlers tickets here.

San Diego band The Album Leaf have announced they'll be coming to London for a date at The Garage on 21st October to mark the release of the band's sixth album 'Between Waves'. Tickets are on sale now! Buy your The Growlers tickets here.

After their stunning sets at #D2DFest in May, five-piece Pumarosa have announced they'll return to Bristol for a headline date at The Louisiana on 27th October. Tickets are on sale now! Buy your Pumarosa tickets here. 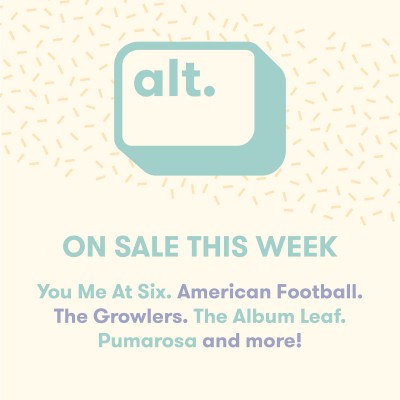