Christmas has most definitely come early with all of the brilliant shows we have on sale this week at alt. tickets. Including Little Mix, Calum Scott, Angus & Julia Stone and more! Take a listen below and find out how to get your hands on tickets for these unmissable gigs.

Fresh from their SOLD OUT arena tour, Little Mix will take their Summer Hits Tour 2018 to outdoor venues across the UK in July! The shows will see the chart-topping band perform their greatest hits including 'Touch', 'Shout Out To My Ex', 'Black Magic', 'Wings', 'Power' and so many more! Tickets are on sale now! Buy your Little Mix tickets here.

Fresh from announcing his brand new album 'Only Human', which includes the platinum 'Dancing On My Own' as well as his brilliant new track 'You Are The Reason', Calum Scott will head out on tour to celebrate! Don't miss Calum live at Nottingham's Rock City, O2 Institute Birmingham, O2 Academy Bristol and London's O2 Shepherd's Bush Empire in April 2018. Tickets go on sale on Friday at 10am. Buy your Calum Scott tickets here.

After announcing a Royal Albert Hall show which will see the band play their incredible 'Moonmadness' album in full, as well as other classic tracks, prog-rock legends Camel will be bringing the tour to venues across the country too! Including Manchester, Newcastle, Southampton, Cambridge and Birmingham! Tickets go on sale on Friday at 10am. Buy your Camel tickets here.

Following the release of their acclaimed album 'Snow' as well as SOLD OUT UK dates earlier this month, Australian siblings Angus & Julia Stone will return for a very exciting show at London's Royal Albert Hall on 10th June. Tickets go on sale on Friday at 9am. Buy your Angus & Julia Stone tickets here.

They're back! To mark the release of their new album 'Combat Sports', West London heroes The Vaccines will come to Nottingham's Rock City on 10th April. Tickets go on sale on Friday at 9am and they're sure to go fast! Buy your The Vaccines tickets here. 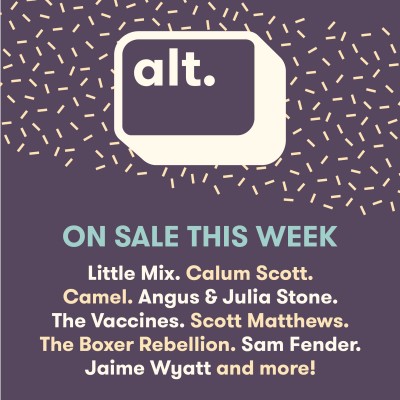