We've got another ace lineup of shows going on sale this week. Including The Wonder Years, Public Service Broadcasting, PWR BTTM, The Amazons and many more! Have a listen and find out how to get your hands on tickets!

The Wonder Years will come to Nottingham on 8th July for just one of two headline UK shows, playing Rock City with special guests Beach Slang, Muncie Girls and The Dirty Nil! Tickets are on sale now! Buy your The Wonder Years tickets here.

Following their incredible set at The Garage on Tuesday, punk duo PWR BTTM have revealed a new London date on 1st September at Koko, London! Check out the latest track from their upcoming album below. Tickets go on sale on Friday at 10am. Buy your PWR BTTM tickets here!

It's been quite a year so far for Reading rockers The Amazons! After a place on the BBC Sound Of... longlist and a SOLD OUT UK tour last month, the band will be back on the road in October, including shows at Bristol's SWX and Nottingham's Rescue Rooms! We strongly suggest you listen to the newest single from their selt-titled debut album below. Tickets go on sale on Friday at 9am. Buy your The Amazons tickets here.

21 years since they released their debut album, electronic duo LAMB have announced a series of 'Twenty One Tour' dates to mark the milestone, including a show at Manchester Cathedral on 16th October. Tickets go on sale on Friday at 9am. Buy your Lamb tickets here!

Mercury nominated musician Ghostpoet celebrates the release of new music with a UK tour, including a stop at Nottingham's Rescue Rooms on 7th November. Have a listen to new track 'Immigrant Boogie' below. Tickets go on sale on Friday at 10am. Buy your Ghostpoet tickets here. 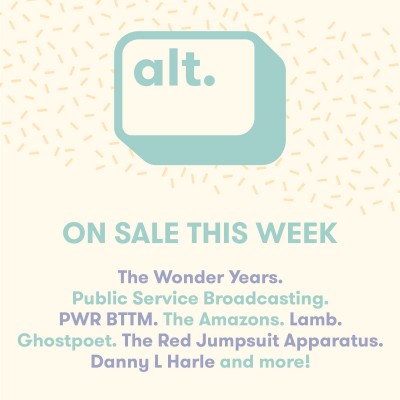