The start of September and a huge new batch of gigs for you to enjoy! Including Garbage, Jeff Tweedy, Rolo Tomassi, Akon and more! Have a listen below and find out how to get your hands on tickets.

Garbage celebrate 20 years since the release of their seminal second album 'Version 2.0' by playing the album in its entirety (including their accompanying B sides!) at O2 Academy Brixton on Friday 14th September 2018. Catch Garbage live at what will be their first show in the city for over 2 years! Tickets go on sale on Friday at 10am. Buy your Garbage tickets here.

After releasing #TogetherAtLast, an album of acoustic reinterpretations of Wilco songs, the frontman will head out on a UK solo tour next year, including Manchester's Albert Hall on 1st February 2018. Tickets go on sale on Friday at 10am. Buy your Jeff Tweedy tickets here.

Following the release of 2015's 'Grievances' Rolo Tomassi take the first steps of the band's next stage by announcing their only headline show of 2017 at London's Borderline on 4th November with special guests Conjurer! Tickets are on sale now! Buy your Rolo Tomassi tickets here.

His Rock City show sold out very quickly, but don't worry if you didn't get tickets, as Akon has announced another date in the East Midlands, this time at Lincoln's The Engine Shed on 24th October! Tickets go on sale on Friday at 10am. Buy your Akon tickets here!

Scottish duo Honeyblood have confirmed details of their 'The Break Hearts Tour' for December 2017! Catch them live at Bristol's Thekla, Nottingham's The Bodega and Manchester's Gorilla with special guests Dead Pretties. Tickets go on sale on Friday at 10am. Buy your Honeyblood tickets here.

If you haven't heard their brand new album 'Monsieur Automaton' yet, you definitely need to. To celebrate, Kagoule will head out on tour in November with chance to see them in Nottingham, Bristol and Manchester. They'll also be joined by Catholic Action. Tickets are on sale now! Buy your Kagoule tickets here. 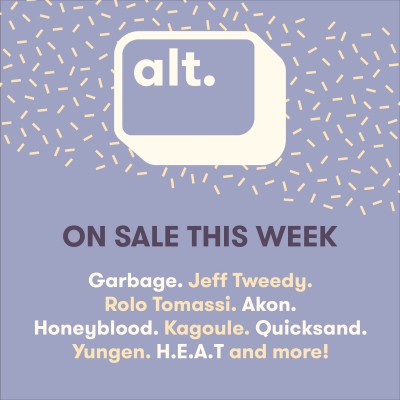