LAST WEEK OF THE MONTH = PAY DAY = LOADS OF GREAT GIGS FOR YOU TO SPEND YOUR MONEY ON! Shows on sale this week include The Human League, Garbage, Nick Mulvey, Joan As Police Woman and more. Take a listen below and find out how to get your hands on tickets for these unmissable gigs.

80s music legends The Human League will head out on a huge 13 date UK tour in November & December 2018. These unmissable 'Red Live' shows will see support come from Midge Ure's Band Electronica. Tickets are on sale now and they're selling fast! Buy your The Human League tickets here.

After their first show SOLD OUT, Garbage have added a 2nd show at London's O2 Academy Brixton on 15th September due to huge demand. The shows mark 20 years since the band released their incredible album 'Version 2.0'. Don't sleep on this one! Tickets are on sale now. Buy your Garbage tickets here.

He released eagerly awaited new album 'Wake Up Now' earlier this year and now Nick Mulvey will be back on tour in May 2018. And it's even better news if you're anywhere near Manchester or Bristol as he'll be stopping at Albert Hall on 18th May and Colston Hall on 19th May! Tickets go on sale on Friday at 9am. Buy your Nick Mulvey tickets here.

Joan Wasser aka Joan As Police Woman celebrates the release of February 2018's 'Damned Devotion' with very exciting UK dates! The Connecticut musician will be live at Birmingham Town Hall and St George's Bristol in April. Tickets go on sale on Friday at 10am. Buy your Joan As Police Woman tickets here.

Embrace are back! The alt-rockers have announced an eagerly awaited new album 'Love Is A Basic Need', their first since 2014, as well as a headline show at Nottingham's Rock City on 30th March. Tickets go on sale on Friday at 10am. Buy your Embrace tickets here.

Canadian musician Bahamas releases new album 'Earthtones' in January, featuring the brilliant track 'No Wrong'. To mark the release, Islington Assembly Hall will host the Toronto songwriter on 4th April. Tickets go on sale on Friday at 9am. Buy your Bahamas tickets here.

ALSO ON SALE THIS WEEK! Pokey LaFarge, Into The Ark, The Used, Gus Dapperton and more! 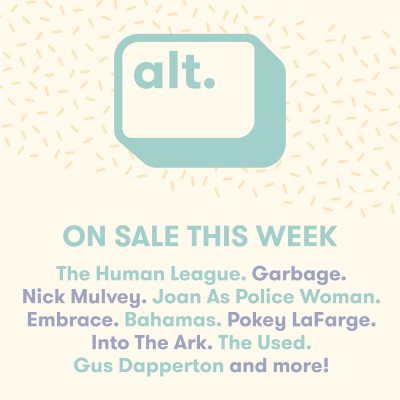