We've got another superb lineup of shows going on sale this week. Including Gabrielle Aplin, Tycho, Brian Wilson, Tash Sultana and many more! Have a listen and find out how to get your tickets!

After we fell in love with her stunning new EP, 'Miss You', Gabrielle Aplin has announced she'll head out on an Autumn UK tour, including shows in Manchester, Cambridge, Brighton, Bristol & London! Tickets go on sale on Friday at 9am. Buy your Gabrielle Aplin tickets here.

After they played to TWO sold out crowds at London's Electric Brixton earlier this week, Tycho have confirmed their return to the UK in June for shows at Manchester's Albert Hall and Bristol's Trinity Centre to celebrate their grammy-nominated album 'Epoch'. Tickets go on sale on Friday at 10am. Buy your Tycho tickets here.

British folk musician Will Varley has confirmed a handful of November shows, including gigs at Nottingham's Rescue Rooms, Bristol's Trinity Centre and O2 Shepherds Bush Empire, London! Tickets for Nottingham and Bristol go on sale on Friday at 9am with his London date on sale now! Buy your Will Varley tickets here. 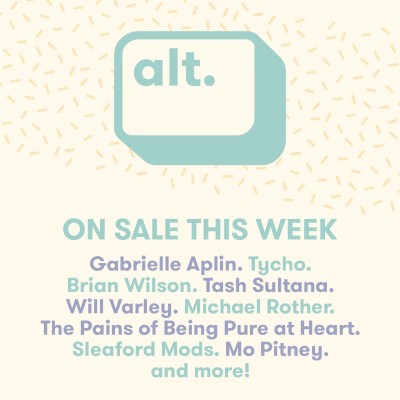