I hadn't been to Victoria Warehouse before, so was blown away by the scale of the place when I walked in.  I was there to see Fat Freddy's Drop - arguably New Zealand's greatest export… only narrowly beating the ‘Lord of the Rings’ films, Lorde (not of the rings), and of course, gap-yah Maori tattoos.  I was excited for the Kiwi 7-piece to grace Manchester with their reggae/jazz/funk/hip-hop/soul/club/anything-else-you-like presence, and boy they didn’t disappoint.

Kicking off their set with a delightfully long introduction into one of their oldest songs – ‘Ernie/Willow Tree’.  The build-up was tantalising, and the tension and excitement was thick like good yoghurt should be.  Catapulting us forward in time, the band swerved into their new 8-Bit reggae banger ‘Slings and Arrows’, the Nintendo-esque synths a delight.  Vocalist Joe Dukie’s performance here was stellar, his caramel-like voice belting out the catchy refrain.  It’s worth mentioning that the stage production here was slick, and the lighting was, as the youth say, “lit”.

The fantastic party atmosphere just got better and better, the band not missing any of the big crowd-pleasers in ‘Blackbird’ and ‘Roady’, the former providing a more sinister tone, with the brass Freddies on point throughout, and the latter getting everyone skanking their problems away.  This was only the start of the dancing, mind, with a house/dub vibe picking up as the gig went on – not without that wonderful Freddies charm though, a brilliant harmonica solo bringing to mind the phrase sailor hip-hop… is that a thing? Well it should be.

‘10 Feet Tall’, another track from the band’s 2017 LP ‘Bays’ creates a more chilled vibe, giving the crowd a breather before the madness yet to ensue.  There isn’t a phone in sight throughout the gig – these fans are certainly in the zone, and it’s no surprise, the stage presence from the band is great, and not without its quirks, one of the performers donning a cape and crown at one point.

After an agonising wait, rapturous applause and screaming beckons the Freddies back to the stage, packing in a few more songs to satisfy the crowd.  ‘Shiverman’ brings back the party vibe – at some points it feels like we’re deep in a Berlin nightclub – but the sort that would let in several thousand rowdy Mancunians.  Returning to a more ‘Freddish’ vibe, ‘This Room’ once again demonstrated the prowess of the brass section, and helped close the set brilliantly.  If there’s one thing that could make this reggae vibe more enjoyable, it’s the thumping bass and electronic augmentation that gives this group their clout and undoubtedly led to their worldwide success. 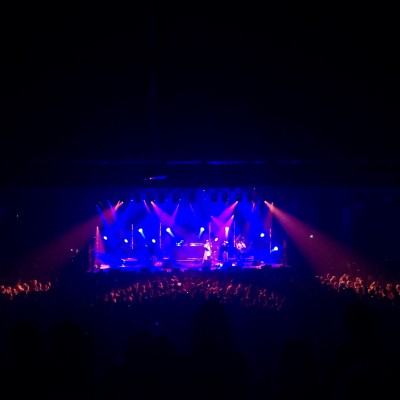