Following a loud, rocky alarm-clock of a performance from support act Wing Dam, Future Islands storm onto the stage with Back In The Tall Grass, a belter of a song from their last album, Singles. Bright white lights lilluminate the faces of fans huddled up against the stage of the O2 Academy as they cheer frontman Sam Herring’s energetic performance.

From the get-go we are treated to Herring’s distinct dancing style; a true performer, he thumps his chest, distraught, during Time On Her Side. Then moving on to Sun In The Morning, Herring’s moves begin to grow larger as he rolls his body sensually in a manner that takes many of us by surprise. Looking around at the crowd, the room is full of beaming smiles at his dancing, oddly fitting for a song which explores an intense relationship which is full of contradictions.

As the evening progresses, the band delights us with hits such as North Star, Doves and the incredibly catchy number Ran from their latest album, The Far Field. During the chorus, the crowd really gets going and shakes the floor as they match the energy and enthusiasm displayed by Herring, who utilises the stage space like a man trapped in a washing machine (in a good way).

Towards the end of the main set, Future Islands unleash their biggest hit, Seasons (Waiting On You) upon the audience. The crowd roars along with Herring as he belts out the song, imbuing it with the very essence of heartbreak through his facial expressions and hand gestures. At one point, Herring manages to fall off the stage, but re-emerges quickly with a grin on his face, spurring on his intense performance.

When the band exits the stage, the whole venue shudders as the audience beg for more music; they’re hungry for it. When Future Islands re-enter, they are almost drowned out by cheers of appreciation. The set is ended with the deliciously slow and melodic Little Dreamer that throws a giant duvet over the crowd and tucks us in with a kiss on our collective forehead.

The whole setlist was a real mixture of old and new, keeping the balance just right for both the hardcore fans there since the start and interested newbies just beginning to dip their toes into the distinct sound of Future Islands; overall a real treat for any fan of synthpop. 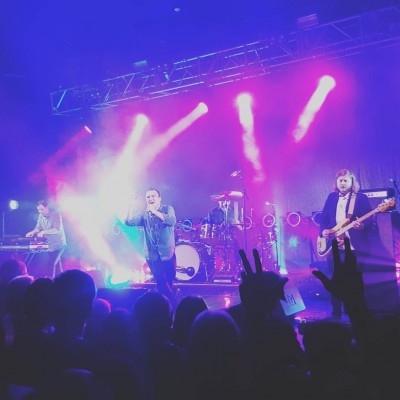