On what felt like the first warm day of the year, support act Roosevelt opened up the evening with a torrent of funky synth-pop. The combination of upbeat barbecue-appropriate tunes and intense neon lights meant that Roosevelt was left imprinted on both retinas and ears alike. Warm colours strobed across the audience and left us hungry for more.

Before long, Glass Animals took to the stage to a roar of reverence, opening up the set with Life Itself, a foot stomping anthem that set the top floor of the O2 Academy shaking as if caught in an earthquake. In stark contrast, the band then spoon-fed us Black Mambo, a delicious tinkling track from their previous album, ZABA. Dry ice silhouetted the band members as they demonstrated the unique variety of textures that their songs showcase.

The Oxford quartet then jumped into Hazey, a gentle number with a dreamy chorus that made the crowd sway, eyes half shut, in a curtain of purple velvety light. Lead singer Dave Bayley treated us to a dance solo, stumbling around on his tip-toes like a new-born foal, drunk on the melody. With the crowd well and truly warmed up, Bayley took a moment to give a shout out to Big Jeff (for those unfamiliar, Big Jeff is a local celebrity known for attending several gigs a week and had been headbanging from the get-go, even on the slower songs).

The mid-section of the set moved onto Poplar St with its catchy riff and bass-heavy The Other Side Of Paradise that shook us from the inside out. The seeds that were planted by these tracks began to sprout up in the forms of hands as the band dove into the popular Season 2 Episode 3, a real crowd pleaser that had a lot of people singing along. Bayley got so into it at one point that he knocked over a light, which it’s safe to say delighted the crowd.

Toes and Take A Slice followed, both mellow numbers from their latest album, How To Be A Human Being. As the opening pips of Cane Shuga filled the O2 Academy, so too did frantic bright white lights, mirroring the nature of the song. The band then segued into Youth, a thumping summery soundtrack that set the floor shaking once more. I certainly wasn’t the only one there singing along with a massive grin on my face.

Towards the end of the set, Glass Animals unleashed their most popular song upon us, Gooey, an aural massage of a song that makes it feel like you’re being dipped in honey. For this track, Bayley clambered onto the barrier up close with the crowd. The security guards surrounded him at once, ready in case he fell over, with looks on their faces that said “This is it, this is our moment”. Unfortunately for the security guards, he emerged fresh from ‘an icky, gooey womb’ ready for the final song, Agnes, which ended the ‘official’ performance on an emotional note.

If the main set was a giant chest filled with treasure and trinkets, then the encore was the jewel-encrusted crown that sat on top. We were spoiled with Pools and the undeniably brilliant Pork Soda, a wacky cerebral song that truly set the venue alight and ended the gig on a high. 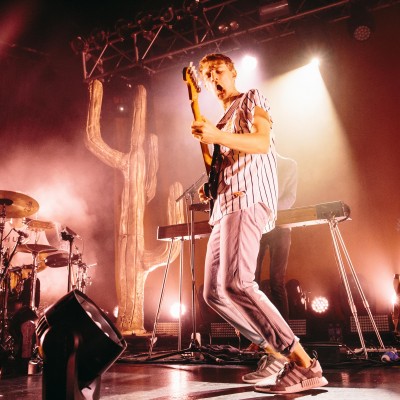