Johnny Flynn and his band The Sussex Wit entered the stage to a rapture of applause, and begun the set with a track from their new album, Sillion. Raising the Dead is a sombre tune which explores themes of fatherhood and death, and captured the attention of all in attendance. From the moment Flynn opened his mouth and began belting out crusty-tongued loveliness, it became clear how talented the man is. His vocals sounded exactly as they did on his albums, and not in a bad way. The harmonies and pitch were completely on point.

Flynn then moved on to some older tracks; Lost and Found which featured plucky guitar and ear-warming harmonies, and The Wrote & The Writ, a song which got the audience tapping their toes in appreciation. Soft dry ice and warm golden lighting lit up the faces of the crowd whose gazes were angled upwards. The whole atmosphere seemed appropriately reverent given the fact that the gig was in a renovated church.

The Night My Piano Upped and Died and Barleycorn really showed off Flynn’s rich gravelly voice and married it with the rest of the band’s instruments. There was a great moment in the middle of Howl where Johnny plucked a trumpet from behind him and played it in-between his roaring vocals. This, unsurprisingly, went down a treat with the audience.

Delving deeper into the set, the raw folk made me feel as if I’d been transported to a field in the sunny countryside, dressed in tweed with a piece of corn between my teeth. Johnny’s sister Lillie owned the flute solo in In the Deepest and the delicious melody found in the chorus of Wandering Aengus was the cherry on top of the rural cake that was the gig.

For the encore, Johnny returned to the stage and played an intimate solo rendition of Heart Sunk Hank. Even without the band supporting him, his strong vocals and effortless guitar playing completely dominated and owned the stage. The Sussex Wit re-joined Flynn and the evening was ended with Eyeless In Holloway, an up-beat banjo-infused track which got the crowd singing along and jigging happily.

It was a real treat being able to watch Johnny Flynn & The Sussex Wit live; I’d strongly recommend seeing them if you get the chance, ideally in the sunshine with a cider in-hand. 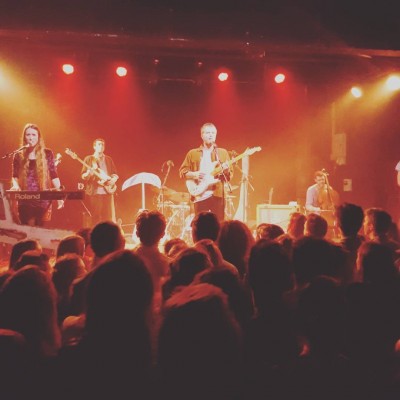