It's unusual for the bassist of classic bands to take on a legacy rather than a singer or guitarist - but then Peter Hook isn't your usual bassist. And he received a rapturous ovation at Rock City on Saturday, 11th March as his latest project, Peter Hook and the Light, paid homage to his previous bands New Order and Joy Division. After the split with the former band mates he's taken the low slung bass centre stage and is currently touring the incredible work he and his former bands created.

Over a mammoth, two and a half hour, 30 plus song set, he gleefully flies through some of the highlights of the back catalogue that's been so influential. The set is split into two with the New Order songs up first with plenty of singalong moments including Ceremony, True Faith and Bizarre Love Triangle.

The Light are a tight unit and you certainly don't miss Bernard Sumner's vocals while Hook even does a great job aping Ian Curtis in the second half full of Joy Division songs. B sides like Dead Souls and Warsaw shine bright alongside the heavyweights such as the brilliant sounding Transmission and She's Lost Control.

A poignant version of Atmosphere (dedicated to Curtis) leads in to the raucous finale of Love Will Tear Us Apart that's sung long into the Nottingham night. 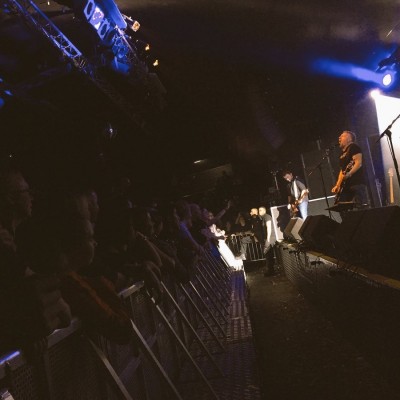