Last year I went on a few Spotify deep dives to find some new music to listen to. I started by checking out the Discover tab and Similar Artists to stuff I already liked, clicking in to the new artists’ pages and checking out their descriptions & similar artists to see if I might be into them. I found a bunch of new stuff that I really liked, so I’m sharing a few of the ones that were actually released last year as well here! I hope you like my picks, and if not... I hope the fact that I liked the stuff I found motivates you to go on your own Spotify deep dive! It’s a great way to spend a bit of time.

When I first listened to Great Grandpa in mid-2019, it was their debut album, 2017’s Plastic Cough, that I got in to. In October, they released sophomore effort, Four of Arrows which I also loved. It’s a much more reserved album than their first, which falls more into Charly Bliss crossover territory, but it hits all the right American indie-emo notes crossed with folky elements to be right up my street. I love lead singer Alex Menne’s voice, particularly when she belts out the line “that’s why I hate you” on track Digger.

Ramonda Hammer are an LA quintet who currently have less than a thousand monthly listeners on Spotify! Their grungey rock sounds on album I Never Wanted Company gets me feeling nostalgic for all the ‘90s alternative grunge bands.

Decidedly less pop-punk than their name perhaps suggests. Self described as “quiet grrrl”, lead singer Mia Berrin draws on elements of grunge, as well as the current wave of bedroom pop, in both her songwriting and vocal delivery. Guess I am super into angsty girl rock at the moment 🤷🏻‍♀️.

Guava Island
This one is just a short, but it’s gorgeous. At only 56 minutes long, there’s no excuse not to watch. The film stars Donald Glover (aka Childish Gambino) and Rihanna as a young couple on the island, the story is sweet, the colours are vivid and there are performances of Childish Gambino songs such as Feels Like Summer and This Is America integrated flawlessly into the plot. Stream it on Amazon Prime.

Lady Bird
I absolutely love this movie, I’m a big fan of Greta Gerwig (Frances Ha!, Little Women) and Saoirse Ronan anyway, but I reckon this is my favourite film from each of them. A coming of age story of the titular character, as she lives through her high school senior year in the early ‘00s. The film is beautifully nostalgic and ultimately at the heart of it, is the story of the relationship between daughter and mother, portrayed in such an honest and resonating way. I first watched this movie after coming back home from visiting my parents and found it so poignant and moving that it’s stayed with me and made me value my relationship with my mum even more, and feel so grateful that we understand each other now in a way that we maybe didn’t when I was Lady Bird’s age. Stream it on Netflix.

Closer
Honestly, Closer is a pretty miserable film, but it’s one of my favourites. Released in 2005, and starring an all star ensemble cast of Julia Roberts, Jude Law, Natalie Portman and Clive Owen, the movie is based on the play of the same name by Patrick Marber. I studied the play when I was taking English Literature at A-Level so I think it’s probably stayed with me from there; the movie is very true to the source material as Marber adapted the screenplay for it. It’s a bleak, stark and, at times, brutally honest look at romantic relationships, and relationships with the truth, as the characters cheat, lie and betray each other’s trust. The film runs almost like a play in terms of the character’s delivery of dialogue, and if you listen closely you’ll catch a few lines that have been used by Fall Out Boy and Panic! as song titles and lyrics (“lying is the most fun a girl can have without taking her clothes off”, “but it’s better if you do”, “he tastes like you only sweeter”, “I love everything about you that hurts”). Stream it on Now TV (according to Google!).

If you are in the mood for some mind-bending sci-fi then check this one out. Written and directed by Alex Garland (Ex Machina, Annihilation), Devs is an eight episode mini-series with Nick Offerman in a serious role like you’ve never seen before, playing the CEO of a mysterious Silicon Valley tech company called Amaya. The show centres around the disappearance of one of Amaya’s employees after being assigned to the ultra-secretive Devs department, and the resulting investigation by his girlfriend that takes turns through industrial espionage, technological possibilities and the very fabric of space and time. Couple all of that with a truly unsettling soundtrack and you’ve got an absolutely gripping watch on your hands. The show aired in the UK on BBC2 so all 8 episodes are available to stream on iPlayer.

The Reversal of the Muse
I’m not a massive listener of podcasts but I loved this one. In 2016, just before she released her 6th album, Semper Femina, Laura Marling recorded a series of podcasts where she discusses female experiences of the music industry with her friends, such as Marika Hackman, and other women who have worked in music including engineers and even music royalty Dolly Parton and Emmy-Lou Harris! It’s a great listen and exploration of the music industry in a casual conversational format, plus it helps that it’s led by one of my favourite artists (which gives me a chance to shout out an extra album, Laura Marling’s A Song For Our Daughter, released a couple of weeks ago - it’s ace!). 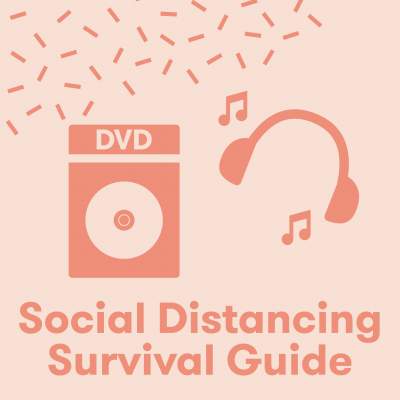