Splendour Festival returns to Wollaton Park on 18th July this year and the first wave of acts has just been announced.

Supergrass, James and Belinda Carlisle head to Nottingham for a day of great music - find out more about the first three acts (more to be announced soon!) below.

As one of Britpop’s frontrunners, Supergrass are perhaps best known for their feelgood anthem ‘Alright.’ Since their 1995, platinum-selling debut LP, I Should Coco, they went on an unbroken run of five top ten records – including two further platinum sellers (In It For the Money & Supergrass) – and ten top 20 singles.

Caught by the Fuzz was declared both Melody Maker and NME’s single of the week following support from John Peel and after continuing to gather support throughout the 90s, Supergrass popped up everywhere from T in the Park and Glastonbury to opening for Radiohead and The Cure.

With no plans to release new music, you can expect all of Supergrass’ biggest and best hits to close Splendour 2020 in style.

Over the past 40 years, James have released some of the most recognisable anthems – including Sit Down, Laid and Tomorrow. Since their formation and early live performances that were mainly just on-stage improvisations of jam sessions, the Manchester icons have sold more than 25 million albums worldwide and played across the world on numerous occasions.

Most recently playing Splendour Festival five years ago alongside The Specials and Bananarama, Tim Booth and co. have had two further top 10 records in the form of Girl at the End of the World and Living In Extraordinary Times.

James will perfectly complement Supergrass – both are renowned as legends in their own genre and both have released some of the biggest and best festival tracks ever.

As an original member of new wave rock band, The Go-Go’s, Belinda Carlisle enjoyed success in the 1980s selling over 15 million records before going solo and releasing some of the most popular pop classics ever.

Global smash Heaven Is a Place on Earth was released in 1987 but continues to fill dancefloors across the world in 2020. Other hits released as a soloist include Circle In The Sand, I Get Weak and Summer Rain. Recent tours have included both solo material and tracks by The Go-Go’s, so be sure to check out Belinda Carlisle’s set on the Confetti Stage at this year’s Splendour Festival.

Supergrass, James and Belinda Carlisle are the first of over 40 acts still to be revealed for Splendour 2020. 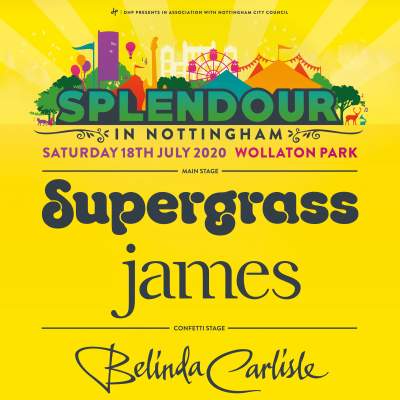