Splendour Festival has just announced the second wave of acts for the biggest party in Nottingham this summer.

The Vamps are one of the best British pop rock outfits right now – with massive tracks such as All Night and Somebody To You, they were the first band ever to headline the iconic O2 Arena five years in a row and will headline the Confetti Stage at this year’s festival.

Performing the coveted early evening main stage slot will be legendary crooner Rick Astley. As an artist that probably needs no introduction, he will be showcasing latest record ‘Best Of Me’ across the world so you can expect his Splendour set to be brimming with classics such as the era-defining Never Gonna Give You Up.

Also joining Rick Astley, James and Supergrass on the main stage is the hotly tipped Becky Hill. Fresh from supporting The Script around the country and set to embark on her biggest headline tour later this year, Becky Hill’s first full length record, Get To Know, is full of feelgood anthems front to back.

Folk-pop singer-songwriter Tori Sheard joins Becky Hill on the main stage. A favourite across the Nottingham live scene, she has sold out two headline shows at The Bodega and Rough Trade in recent times, drawing in new fans from across the UK with every show, she is certainly one not to be missed at Splendour.

Amber Run will also be there to provide indie-rock to the masses. Latest record, Philophobia, was released last year and was described as “something entirely euphoric to sing and shout in unison” by Indie Is Not A Genre and their natural stage presence is one to be admired. Packed with cinematic pop, Amber Run’s sound is perfectly crafted for festival performances.

Iconic Britpop favourites Sleeper head to Wollaton Park after spending two decades away from the limelight – now joined by The Prodigy’s Kieron Pepper, original members Louise Wener, Jon Stewart and Andy Maclure sold well over a million copies of singles and albums during across the 90s. With a legion of dedicated fans across the world, their return has been brilliantly received.

Tickets – including limited VIP tickets - for Splendour Festival 2020 are on sale now and available here.

Listen to our Splendour 2020 playlist below: 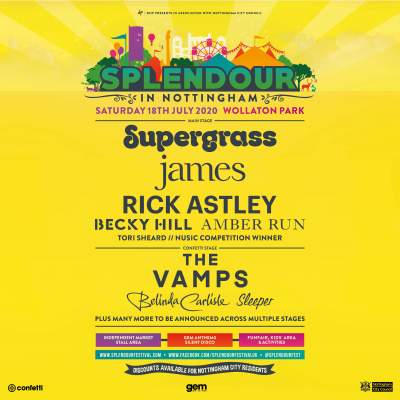