On Saturday 23rd July, Splendour Festival returned to Wollaton Park for another packed day of family fun. Jess Glynne, The Human League, The Darkness, UB40, Jamie Lawson and so many more musicians, entertainers and comedians played to a huge sold out crowd.

alt. were there to catch all the action, including some behind-the-scenes moments. Take a look at the #AltatSplendour highlights below!

The crowds were welcomed to the sunny day by the incredible Nottingham School of Samba.

Nottingham School of Samba are here to give you a very warm welcome to this year's @splendourfest! #AltatSplendour pic.twitter.com/lCNurd1ubg

After Future Sound of Nottingham winners Super Furniture opened the main stage, it was time for Nottingham's own Ady Suleiman to do his thing!

It wasn't just music at Splendour, there was also great entertainment, including GEM 106's Silent Disco!

We snuck backstage to meet some of the artists, including Confetti stage favourites, The Rifles!

We caught up with @theriflesband ahead of their Confetti Stage set @5pm. Make sure you go & see them #AltatSplendour pic.twitter.com/6I8g31pa90

After rubbing elbows with the stars, we legged it over to see one of our favourites, Jamie Lawson, on the main stage!

UB40 drew a huge crowd and it wasn't hard to see why.

After a little dance, we headed backstage to see what we could find and discovered Confetti Stage headliners' The Darkness' dressing room!

We're hanging around behind the Confetti Stage and look whose dressing room we've found! #AltatSplendour pic.twitter.com/bieHKoJFe1

It was sing-a-long central back over at the main stage for The Human League.

Closing the festival was Splendour headliner Jess Glynne who brought all of her hits, including the powerful 'Take Me Home'.

After an incredible day, the 20,000 plus crowd filed out of Wollaton Park and marked the end of Splendour Festival 2016.

If you enjoyed Splendour Festival, artists from across the day will be on tour soon! Have a look here.

Tickets for Splendour 2017 are already on sale. Don't miss it! 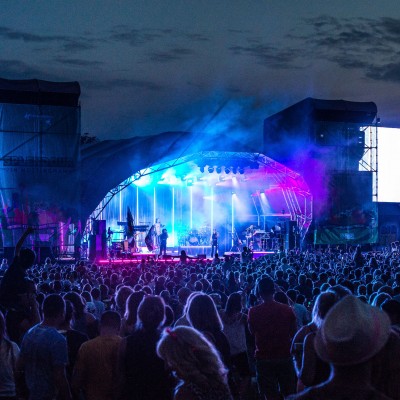