This week Ticketing Coordinator Kerri Johnson gives us hers!

Iron Maiden – The Number of the Beast

Of course, I have to start this list with my all-time favourite band, Iron Maiden. These heavy metal godfathers formed in 1975 and are still going strong with 39 albums and counting - all while pioneering the New Wave of British heavy metal genre. Although I love the first two records, their third album, The Number of the Beast, was the first to feature the absolute powerhouse that is Bruce Dickinson on vocals. Opening with the insanely fast ‘Invaders’, you know what you’re in for with this album. It’s a great tribute to the previous albums’ more punk style. Following on from this, ‘Children of the Damned’ taught us that Maiden had a depth that people often don’t expect from a metal band. It also showcases that Maiden were absolutely right to get Bruce on board. The title track is still a live favourite to this day, and you also have songs such as ‘The Prisoner’, ‘22 Acacia Avenue’ and ‘Run to the Hills’ to boot! The album then features one of the greatest songs to end an album - Hallowed Be Thy Name. A seriously impressive album that propelled Iron Maiden even further and set them on a course to be the world’s biggest metal band!

As a huge fan of Judas Priest, it’s hard to pick just one album from their immense back catalog. But in the end, it had to be Firepower. Released in 2018, this is proof that when it comes to Priest, there’s just no let up! Their first album was released in 1974 to very little fanfare, but over the years, the band found their style and were quickly setting the standard for what it was to be a heavy metal band. Fast forward to 2018 and they were still doing just that… With Richie Faulkner replacing K.K. Downing on guitar, and the legendary Andy Sneap producing, this album is so damn heavy, but also has the feel of a reenergized band, which is a serious achievement considering how full Priest’s career had been up until this point. Opening with the blistering title track, this album is a statement that Priest are back and better than ever. Standout songs are definitely ‘Lightning Strike’, ‘Rising From Ruins’ and ‘Traitor’s Gate’. I should’ve been seeing the band twice this year at their 50th Anniversary gigs, but this album will definitely keep me going until then!

Metal and classical music are two genres that just shouldn’t fit together. But somehow, Metallica made it work. The album S&M (an abbreviation of Symphony and Metallica) is a live album featuring the metal band Metallica, alongside the San Francisco Symphony. Bass player Cliff Burton had always wanted to combine the two opposing genres, but tragically his life was cut short when in 1986 the band’s tour bus crashed in Sweden, killing him instantly. The band would feel this loss deeply, until in 1999 they decided to fulfill Cliff’s dream. Opening with ‘The Ecstasy of Gold’, composed by the late, great Ennio Morricone, which Metallica use for every live show, you can hear and feel the excitement in the crowd as if you were there. They then go straight into ‘The Call of Ktulu’, which, as an already purely instrumental track, really shows off how incredible this orchestra are. We then move onto the classics, such as ‘Master of Puppets’, ‘Fuel’, and ‘The Memory Remains’, and that’s just the first half! The second half is really what impresses me, as the band chose to play songs that are often overlooked and were, unfortunately, received poorly originally. In particular, ‘Until It Sleeps’ and ‘Outlaw Torn’ are the standouts from this album. The orchestra gives a new depth to these songs and completely reinvents them, showing just how good Metallica are as song writers. No matter how many times I listen to it, this album never fails to give me goosebumps.

In my opinion, there is no better trilogy than The Lord of the Rings. The film makers spared no expense bringing J.R.R Tolkien’s characters to life, making Middle Earth the perfect place to escape for a few hours… jewelry-destroying and orc attacks aside of course! The Fellowship in particular created a life-long obsession for me with Middle Earth. It introduces us to the age-old fight of good vs evil, but in this case, features fantastical creatures such as Orcs, Elves and Hobbits. The acting and special effects means it always tops the list as my favourite movie of all time. I mean, who wouldn’t want to imagine themselves living in the idyllic green pastures of The Shire during times like these…

I’m a big fan of action movies, particularly when there’s a bit of history thrown in. Another visually stunning and incredibly well told story, this time of a general who defied an Emperor, who was then sentenced to death, and eventually makes his way back to Rome through the ranks as a gladiator in order to find justice. Action-packed and emotional, this is without a doubt Russell Crowe and Joaquin Phoenix at their finest. No matter how many times I put this film on, it has me gripped from beginning to end. An absolute masterpiece. ARE YOU NOT ENTERTAINED?

Cabin In The Woods

From the outset, this may look like your bog standard horror movie – a group of teenagers take a trip out to a creepy cabin in the middle of nowhere, where they will be terrorized endlessly by whatever is lurking in the woods. However, this film is so much deeper and more clever than that. It’s a comment on horror movies themselves and works to deconstruct them. All while playing out as a seemingly basic plot with all the normal clichés - pre-marital sex is a big no-no, don’t go down into the creepy basement, and DO NOT read the Latin in the blood-stained book – but it is all for much more calculated and sordid reasons than you would expect… The ending is also perfect for horror obsessives like me, as the film references so many other movies in the genre. A really fun and creative take on horror!

As I mentioned before, I’m a bit of a history nerd. Therefore, a comedy where each season is based in a different historical period is always going to be a winner for me! The first season begins in 1485 and explores medieval life in Britain, while introducing us to the scheming Blackadder (played magnificently by Rowan Atkinson). The second season is set during the reign of Queen Elizabeth I, Season Three is set in the Regency period and Season Four is set in 1917 in the trenches of the First World War. The show superbly references historical figures and events, but also manages to add a comedic and sometimes heartfelt twist. With an absolutely stellar cast, including the likes of Stephen Fry, Hugh Laurie and Miranda Richardson, it’s no wonder this show constantly tops the list for Best British Sitcom of all time. Even though I watched it for the first time when I was young, it’s a testament to how great this show is that I always keep returning to it.

This awesomely funny podcast is essentially two life-long friends drinking beer and discussing all things metal. Each week the guys pick a different heavy metal topic, such as Favourite Metal Guitarists, Essential Thrash Metal Albums and my personal favourite - When Bad Songs Happen to Great Bands. They explore metal sub genres, and often veer off into hilarious stories. With a running time of at least an hour and a half, and new episodes being released every Monday, these are perfect for long walks and car journeys. The podcast has also introduced me to countless new bands, so I really can’t recommend it enough if you’re a fan of metal! 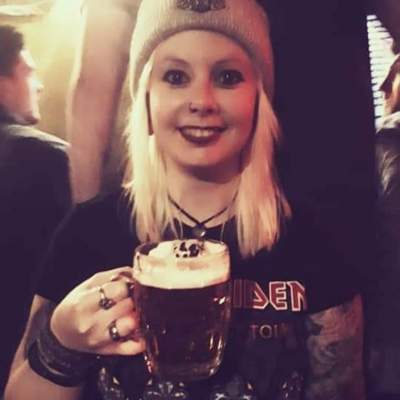