Sydney based six-piece Winston Surfshirt bring their unique blend of hip-hop and funk to the UK this week with shows in Manchester, Bristol, Brighton and London.

We caught up with the band to discuss touring, Elton John and apple crumble.

Firstly, you’re heading to the UK next month for a run of headline dates – how are you feeling ahead of being here?

We’ve been here a couple weeks now! Me, Bustlip and Bone showed up and spent a couple days in London then went down to the house I grew up in (West Sussex) and the other boys joined and spent a few days writing down there. Was fun and always good to be back.

You’re playing some pretty sweet venues including Thekla and Electric Brixton – what’s it like to have your name above those doors so to say?

Tis good! Me, slip and bone went in to Brixton last week for drinks and dinner - we actually walked past the Electric! It was cool to see the poster up outside.

The run of dates coincides with a full European tour – what are the major differences when playing to crowds away from your native Australia?

Australians are everywhere, so luckily we always have a few Aussies at any show, but we love playing in Europe and UK. It is always a great feeling being on the other side of the world and hearing people sing your songs.

On a similar subject, what do you particularly enjoy about the UK – both musically and non-musically?

the UK is my first home. I lived here until I was 12 then moved to Australia, so being taken away made me painfully patriotic towards England. I wear the three lions with pride in 'Straya. Musically it is unrivalled - the amount of history that’s here musically is huge.

Apple Crumble was released last year – how has the reaction been to it?

I’ve just copied a review of Jamie Olivers Apple Crumble to give you a gist of the reaction:

"I don't like cooked fruit, apples in particular and at school, it was usually apple crumble. As I hate to miss out on pudding, I used to just eat the crumble topping! Now I'm older, I still hate virtually all manner of cooked/stewed fruit, but I do love berries, so I've taken to making blueberry and blackberry crumble. Occasionally, I like to eat for breakfast."

Elton John dedicated his latest Rocket Hour episode to some brilliant Australian artists including yourselves – what does it mean to be recognized by such an icon?

I still have to pinch myself - he’s just the best. His love for new music it unrivalled, just knowing he likes the music is mind blowing to me. We managed to catch his last show in Sydney which was inspiring.

What else have Winston Surfshirt got planned for 2020? 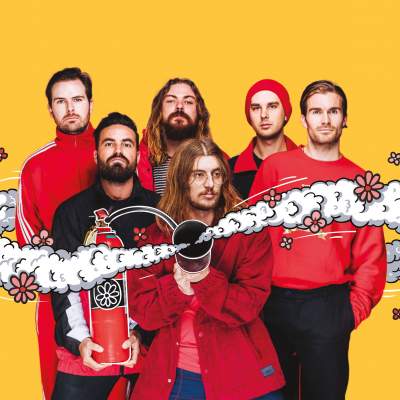