Beat The Streets Festival has announced the second wave of acts for its 2020 edition.

Nottingham icon Jake Bugg joins the line-up after his show at Rock City earlier this year sold out in less than a day. A household name locally for well over a decade and known internationally since the release of his eponymous debut LP in 2012, he has headlined festivals, sold out arenas and released a further three records.

Award-winning folk singer and activist Grace Petrie and karaoke favourites Bamalamasingsong are also amongst the new additions who will bring the city together to raise vital funds for Framework.

Petrie’s unique takes on life, love and politics have appealed to the masses – so much so that debut studio album, Queer As Folk, raised £18,000 in a fortnight via a Kickstarter. Bamalamasingsong are a unique musical outfit that bring communal singing to Nottingham – removing the conventional singer, Bamalamasingsong instead play hits from Elvis to Radiohead and allow the crowd to be the front-person.

Taking place across Rock City, Rescue Rooms, The Bodega and Rough Trade; Beat The Streets gives festival-goers the opportunity to check out something a bit different to their usual taste.

Also returning once again will be the massively popular tombola – this year sees prizes from Splendour Festival, Dot To Dot Festival, Rock City, Broadway Cinema, HMV, Brewdog and many more great prizes – all proceeds from the tombola will be donated to Framework.

All the newly announced acts are below: 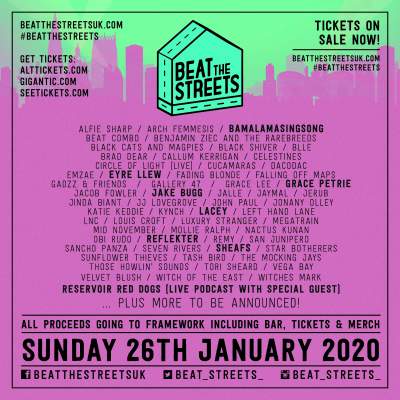