We've got tons of brilliant shows on sale this week that you're definitely going to want to know about! Inluding Beat The Streets, The Mavericks, Kelela and more! Take a listen below and find out how to get your hands on tickets for these unmissable gigs.

Introducing Beat The Streets, a brand new multi-venue event taking place in Nottingham. Not only will you get to hear over 80 acts across more than ten stages, but you'll also be helping Framework tackle the causes and consequences of homelessness. All proceeds from ticket sales, bar revenue and merchandise will be donated directly to this incredible charity. Tickets go on sale on Friday at 10am. Buy your Beat The Streets tickets here.

To celebrate 20 years since they released their fantastic album 'Trampoline', Florida's finest The Mavericks are heading out on tour in 2018! Including London's Palladium, Birmingham's Symphony Hall and Manchester's O2 Apollo! Tickets go on sale on Friday at 10am. Buy your The Mavericks tickets here.

Fresh from releasing her critically acclaimed new album 'Take Me Apart' and selling out TWO dates at Heaven, Kelela has announced a show for February 2018 at London's Roundhouse. Check out her incredible performance on Later With... Jools Holland from earlier this week! Tickets go on sale on Friday at 9am. Buy your Kelela tickets here.

The Rasmus are back! Returning to Nottingham & Bristol for the first time since 2012, the Finnish rockers have announced 2018 tour dates at Rock City and The Marble Factory to celebrate the release of their new album 'Dark Matters'. Tickets are on sale now! Buy your The Rasmus tickets here!

Following their SOLD OUT Rescue Rooms date last year, Moose Blood are back in Nottingham, this time for a headline show at Rock City! They're joined by special guests The Dangerous Summer. Tickets go on sale on Friday at 9am. Buy your Moose Blood tickets here. 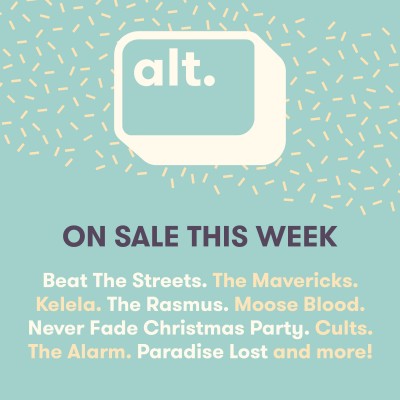